Two weeks ago, a young lady used her social media address to seek help for a rather sensitive ailment that had afflicted a woman in Nakuru County.

Ms Waruguru Muthaka called on well-wishers to come to the aid of a woman suffering from a pubic wound for almost one year in Tabot village, Rongai Sub County in Nakuru.

The appeal caught the eye of Nakuru Governor, Her Excellency Susan Kihika who deployed her team to investigate and take action.

Ms, Everylne Lelei, a widow though in pain, had been neglected by close family members and friends. She was indeed in need of urgent intervention.

Tagging along nurses from Rongai Health centre, the county team took Ms Lelei from her home to Nakuru PGH Hospital where she was admitted and started her medication.  Since she was in urgent need of blood transmission, she was given three pints of blood and operated on as a way to heal the wound.

On Thursday a lady who was carried to the hospital, oblivious of her surroundings and happenings walked home, pain relieved and ready for a second surgery.

Her bill amounting to Sh352, 310 has been cleared by the governor and medication catered for.

Her children have been taken back to school and fees paid. 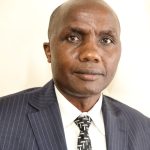 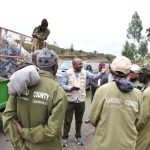