Institutional collaboration has been on the rise and as a county, we have amandate to relate with our local institutions.
Yesterday, The City Manager Mr Gitau Thabanja paid a courtesy call to the Egerton University Deputy Vice Chancellor Academic Affairs Prof Benard Aduda to discuss possible areas of collaboration between the university and Nakuru City.

The discussions were centered on key issues confronting the cultural sector and recommendations from the sector players.

The joint venture equally saw successful deliberations on future preparations of the annual cultural week which is scheduled to be held early next year.

Some of the issues raised were the development enactment and implementation of the Cultural Policy, research and data collection and capacity building programmes in the cultural arena and harnessing of cultural arts education in institutions

The DVC called upon the Manager to congratulate Nakuru for being the first City in East Africa alongside Port Louis (Mauritius) to be designated as a UNESCO creative City under the craft and folklore category.

Mr Thabanja who was accompanied by few of the City’s staff on his part expressed delight at meeting such an important network institution in the cultural sector.

“The cultural sector has been faced with countless issues, the partnership will however reaffirm an advanced and successful cultural agenda that endeavours to benefit residents of Nakuru City” Said the Manager

Mr Thabanja further reiterated on the collaborative effort of both the City’s and County Government’s commitment and readiness to work with all cultural stakeholders and institutions and called for utmost support for the success of the sector.

The meeting was joined by Senior Official at Egerton University and Board member of Nakuru City,Beatrice Magembe, Officials from the University’s Dean of students and students councilors among others. 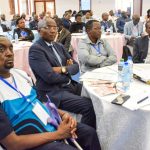