BY NGPU
Plans for the development of an Industrial Park in Naivasha, Nakuru County are at an advanced stage and Kenya Generation Company (KenGen) is set to make public feasibility studies for the initiative next week.
Speaking when he paid a courtesy call on H E Governor Susan Kihika at her Nakuru County Headquarters last evening, KenGen acting Managing Director and Chief Executive Officer, Mr Abraham Serem feasibility studies on the 4,500 acre Industrial Park will be announced next week.
We have already carried out feasibility studies on the Industrial Park and we will announce them next week. Then we will set the stage for the development of the Industrial Park which we believe will have unbelievable impact on Industrialization in Naivasha he said while presenting areas in which Nakuru County can benefit from the presence of Kenyas biggest electricity in her jurisdiction.
Governor Kihika welcome the initiative by KenGen to lay the infrastructure, which will include provision of land and cheaper electricity for investors, as a spark that will assist the county to achieve its goal of restoring Nakuru as an industrial hub in the country. I want to thank KenGen for the idea of an Industrial Park in Naivasha. We now have the land and discounted electricity that we can use to attract investors to come to Nakuru. It gives an edge as a centre of attraction for investors, she said.
Governor Kihika was accompanied by Chief of Staff Dr Peter Ketyenya while Mr Serem was flanked by General Manager (Corporate Affairs) Ms Mary Malu and Ms Grace Chepkwony, the manager in charge of corporate social responsibility.
The Industrial Park, which is finally taking shape, will carter for both small, medium and heavy industries which will benefit from electricity provided by KenGen at a tariff of Kshs5 per kilowatt. Mr Serem said KenGen had applied for a license to distribute energy because its current mandate is to generate electricity with Kenya Power and Lighting Company (KPLC) as the only off-taker that distributes power to both domestic and industrial consumers.
Governor Kihika assured the KenGen delegation that the Nakuru County will expedite approvals of change of land status on which the Industrial Park is located from agricultural to industrial use speedily. One of the issues we have been dealing with is ease of doing business. We are at the tail end of the process of ensuring that applications for change of land use are approved within 48 hours after reception. This will also apply to the licensing of businesses. Our intention is to make Nakuru a business friendly County; the Nevada of Kenya, she said.
KenGen generates, currently, a total of 799 megawatts of electricity at Olkaria, in Naivasha from drilling geothermal. We are proud as the home of geothermal electricity in Kenya and we want our people to benefit from these resource, the Governor said.
So far, KenGen has constructed Naivasha Level 4 Hospital, supplied water to residents around their plants in Olkaria, put up some schools for those who have been displaced in addition to constructing roads. We however, seek your assistance in equipping the hospital, she said. Governor Kihika agreed with the KenGen team to give tenders to local communities, provide water tanks to communities lacking water, and assist in her pet project of feeding ECDE children in the county. 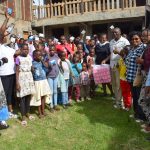 Adolescents in Bahati Ward Trained on the fight against Gender-Based ViolenceDecember 7, 2022
MATATUS
Delivering on campaign pledges is one of H E Governor Susan Kihikas mantra in Nakuru CountyDecember 7, 2022