By NGPU
Yesterday, Governor Kihika handed matatu owners and their crew an early Christmas when she allowed them to resume operating from the Central Business District (CBD) of Nakuru City after Jamhuri Day celebrations next week. Even as she granted the matatu Saccos their wishes, Governor Kihika listed a raft of conditions which will guide the PSV transport operators within the city as she warned that they will be evicted again if they flouted any of the rules that were set for their return.
I will allow you back to town; you will get back to town but you will be held accountable, as Saccos, if you flout the conditions that we have set. We want law and order even as you get back to town, she said. Governor Kihika spoke during a consultative meeting with officials of matatu Saccos led by their chairman, Mr Stephen Mule and was attended by Nakuru County Police Commander, Mr Peter Mwanzo and Members of the County Assembly (MCAs) from Nakuru at the Kunste Hotel in Nakuru.

We will reassess you conduct by January 15 in the New Year and if we find that you are not keeping law and order, you will have to deal with a lot of tear gas. Any violation of the terms we have agreed here, you will be kicked out without any notice, she said as the matatu Saccos officials broke into song and dance. I gave you a pledge and I am here to fulfil it, she explained.
Key among the conditions was the matatu Saccos accepting that the return to town was a temporary measure since Nakuru County was constructing a modern bus park at a cost of Sh260 million which was expected to be completed in 18 months time. You are allowed back but only on temporary basis, the Governor said as Saccos officials agreed unanimously. The Saccos will be required to pick and drop passengers at designated stages, operate in gazette terminuses, obey County traffic enforcement teams who will work with the Traffice Police to ensure flow of vehicles in the city, all matatus crews to carry identification cards and prohibited any Sacco from subletting its slot to another group. The holding ground for fleets of matatus of each Sacco was outside town.
Governor Kihika also formed a committee made up of Nakuru County officials and matatu Saccos to sign Memoranda of Understanding (MoUs) binding the PSV operators to the terms of returning to the CBD. You are not just returning to town freely; each Sacco is going sign a memorandum of understanding (MoU) with the County, the Governor said as she directed the police to ensure the return of matatus to the CBD was orderly. If you get disorderly, you will be removed, she warned.
Governor Kihika had pledged to allow matatu Saccos, which were kicked out of the town for being disorderly, to resume operating in the CBD if she won the August 2022 elections. Mr Mwanzo, in his remarks, cautioned the matatu Sacco officials to ensure that their crew maintained order as he revealed latest statistics showed that a total of 228 accidents had occurred within the county, in which 25 people had lost lives and 33 permanently disabled. The Governor has allowed you back to town, we want you to maintain law and order. We want discipline on our roads and our officers will not hesitate to action if you flout them, he warned.
Mr Muli thanked Governor Kihika for delivering on her pledge and urged his members to abide by the terms which had been given for their return to the CBD. We will need to follow the law and the terms that have been given by Her Excellency, the Governor. We also must make it easier for the police to work, he said.
Sacco officials who spoke complained of the loss they had incurred and appealed to the Governor to allow them back to the CBD.

6
A game changer in the quest to restore Nakuru County as an industrial hubDecember 7, 2022
Nakuru adopts multi-sectoral approach in Training Communities to Change Behaviors that Perpetuate GBVDecember 9, 2022 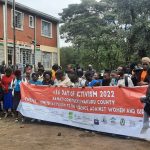